GGV is the only majority-Black public housing in affluent Marin County as well as the only one that accepts families. It should be a point of pride for the County; instead, the Marin Housing Authority’s deliberate negligence has taken a devastating toll. The MHA’s solution? Ignore residents’ pleas for immediate, necessary repairs while claiming to be responsive. Squander money on outside developers’ aborted plans while bemoaning limited funds as an excuse for inaction. Destroy the village in order to claim to save it.

But residents have a better plan. One they've been fighting to get the County to consider since 2013. They want deep green renovation of their existing homes, no new buildings, and a pathway to home ownership through a limited equity housing coop (LEHC). Learn more about the history - and potential future - of this very special place.

READ THE RESIDENT PLAN FOR THEIR COMMUNITY - "A GOLDEN OPPORTUNITY FOR GOLDEN GATE VILLAGE" - HERE.

FOLLOW THE SLIDE SHOW PRESENTATION TO THE HOUSING COMMISSION ON 1/25/22 HERE.

About The Resident Council

How You Can Help 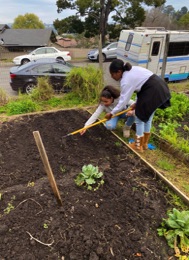