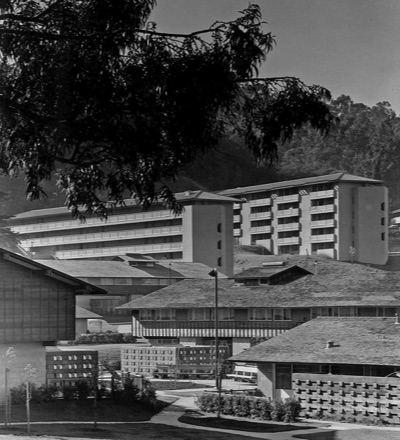 Spin: GGV residents want seniors to have their own, new high-rise building.

Truth: GGV has a long history of older residents successfully and happily “aging in place.” The community does not want elders shunted into new, one-bedroom apartments because MHA claims they are “over-housed” in their current  apartments. (Apparently, the MHA bureaucratic mindset can’t conceive that seniors might actually use more than one bedroom: for grandchildren and extended family visits, for a caregiver, to provide fostering for an unhoused child, etc.)  Moreover, existing units were built to provide immediate access to the outdoors from every apartment. In contrast, a new senior building would be the only one with internal hallways and elevators - making it far less safe, especially for a more-vulnerable population, as the CoVid pandemic has made painfully clear..

Due to the unrelenting efforts of the Golden Gate Village Resident Council and its many supporters, the Marin Housing Authority (MHA) was recently forced to sever its ties with the Michaels Development Company - the for-profit developer from New Jersey whose plans (with Marin County’s blessing) would have destroyed the community.

While this is a major victory, it does not mean the MHA has disowned Michaels’ fabricated narrative or the lies they perpetrated. To the contrary, the MHA is busy weaving these into new storylines, and the threat of new development still looms over GGV.

For this reason, even though Michaels is now out of the picture, it’s still very important to take you through their key presentation points and where the truth actually lies. So when the MHA tries to pull the wool over your eyes a second time, you won’t be fooled.

Truth: MHA has steadfastly ignored the resident-driven planning process. Since 2014, the Marin Housing Commission, along with Lewis Jordan, has refused to consider the Resident Plan for rehabilitation and renovation, endorsed by more than two-thirds of GGV residents and presented by their elected representatives on the Golden Gate Village Resident Council (GGVRC).

Spin: These were developed by the “Community Working Group” convened by MHA.

Truth: The six Guiding Principals were formulated in 2009 by the advisory group that preceded the Community Working Group. The Resident Plan integrates all six principles in its vision document. The Michaels plan offers lip service but no substance to a few, while actually running counter to others. For example:

•     Principle: Preserve Historic Marinship Heritage. Michaels: Seems to think that crowding 50% more units into Golden Gate Village and destroying the integrity of the Aaron Green/Lawrence Halprin vision in the process is the way to preserve a historic designation.

Spin: “Build 1st” is the best option and involves “no involuntary displacement.”

Truth: Under the Michaels plan, what “build 1st” actually means: destroying 16 existing homes (and displacing residents); building 156 new units (a net density increase of almost 50% more apartments). “Build 1st” also means delaying critical repairs and rehabilitation of existing units for at least 3-5 more years. Actually, there are better options - which have been employed successfully in Marin in other situations - that the Marin Housing Authority has refused to consider. The least disruptive option is “checker-boarding,” where available units - rather than being immediately re-rented - become temporary housing for residents during the renovation of their own apartments. The largest buildings at GGV only have 21 units. A second option is to house 21 families at a time in hotel rooms while their units are being renovated. (Since the beginning of the pandemic, Marin County has provided approximately 120 rooms for homeless housing; finding 21 rooms should not be a problem.) Even under the most extreme circumstances, the maximum build-out that could be justified would be 21 units. There is no scenario that justifies 156.

Spin: Did extensive due diligence in 2019, soliciting input and feedback on ideas from a majority of GGV residents.

Truth: So-called “listening sessions” were poorly advertised by MHA and, consequently, very sparsely attended (often by only 2-3 GGV residents). As for so-called “new” ideas: since 2013 the Resident Plan has incorporated both deep green renovation and no resident displacement. The Marin Housing Commission has simply refused to consider this plan.

Spin: Our plan is what Golden Gate Village residents want.

Spin: (This particular bullet point is such a bald-faced lie it deserves to be quoted directly). “Seek funding for ownership opportunities for existing GGV residents for units within GGV.”

Truth: Michaels plan calls for demolishing 16 existing, low-rise homes and building two new high-rise buildings with a net increase of 140 new units, or almost 50% more households. At the same time, it provides no additional parking for these new units. Building 50% more homes in any existing neighborhood has a substantial impact on the entire fabric of that neighborhood, including view-sheds, character, ease of access, and more. The proposed plan would also eliminate the existing skate park. And as for the 16 homes Michaels plans to destroy, their residents can take comfort in the knowledge that the demolition of their units is only “minimal.” (Not dissimilar to the easily dismissed “collateral damage.”)

Spin: GGV residents want seniors to have their own, new high-rise building.

Truth: GGV has a long history of older residents successfully and happily “aging in place.” The community does not want elders shunted into new, one-bedroom apartments because MHA claims they are “over-housed” in their current apartments. (Apparently, the MHA bureaucratic mindset can’t conceive that seniors might actually use more than one bedroom: for grandchildren and extended family visits, for a caregiver, to provide fostering for an unhoused child, etc.)  Moreover, existing units were built to provide immediate access to the outdoors from every apartment. In contrast, a new senior building would be the only one with internal hallways and elevators - making it far less safe, especially for a more-vulnerable population, as the CoVid pandemic has made painfully clear.

Truth: Michaels would replace 16 existing low-rise units with a four-story building containing 108 new apartments. No one has asked the current 16 families if they want to be housed in a multi-story apartment building instead. No one has asked them or any other residents if they think it’s a good idea to add 92 new families to that location, or what impact such a move would have on the overall community. As for “open space upgrades,” all of this has been addressed in the Resident Plan; Michaels brings nothing new to the table.

The Vision of New Community Space

Spin: Michaels is promising all kinds of “goodies.”

Truth: At some point down the road. Maybe. This is nothing but a bribe. GGV residents are asking for the rehabilitation and deep green renovation of the places they call home now. They have never asked for a new dance hall in a couple of years.

Spin: Look at the wonderful possibilities Michaels has in store for GGV.

Truth: The presentation features nothing but stock images. They mean nothing. The Resident Plan builds on the history, experiences, memories and suggestions of the residents themselves, such as the recently reestablished and enthusiastically embraced revival of the Victory Gardens project. The Resident Council also has the original, detailed landscape plan designed by Lawrence Halprin. The Resident Plan incorporates this original design in keeping with the community’s designation as a historic district, which covers not only the buildings but the entire property site, including parking lots, playgrounds, walkways and open spaces.

Spin: The Michaels plan is exactly what GGV residents said they wanted.

Truth: The only statement on this slide in the presentation that is true is #1: “Residents love their home, but want the apartments renovated and fixed up.” This is the exact point the Resident Council has been making since 2013 to the Board of Supervisors and MHA. It has been routinely ignored. Points #2 and #3 were fabricated by Michaels to suit their own agenda: build as much new housing as possible to maximize profits. (And if this is explicitly not what the community wants, simply continue to ignore them.)

Spin: Only Michaels has access to the amount of funding necessary to rehabilitate Golden Gate Village.

Truth: All of the programs Michaels lists are available for the Resident Plan as well - and were identified as potential funding sources by the Resident Council several years ago.